There’s nothing I like more than a good bandwagon.

Oh sure, blazing your own trail is fine. Setting trends, writing history, standing head and shoulders above the madding throngs, blah blah blah. It’s also really hard. Much better to fall in line, go along with the crowd and get with the program. I’m talking about thinking inside the box.

On the other hand, you don’t want everyone and their bug-eyed stepsister in your way, either. So the bandwagon shouldn’t be too big. It’s a very fine line. Being a sheep is actually a lot harder than it looks.

So this week, I set out to sheep it up on just the right kinds of Facebook walls. These are companies who recently managed to attract one million likes to their pages — popular, but not too popular. The perfect fit. Just call me Goldisheep.

Of course, when we got down to the products, things didn’t go as smoothly as I’d hoped. Read on for the reviews — and my actual Facebook posts on the companies’ walls. These guys may have a million fans — but there’s only ONE Zolton. Baaaaa!

I didn’t want to start on an empty stomach, so I started out with a light snack. At first, I was sad that I had no one to share it with — but then “Papa Chester” went and got all Zen on me: 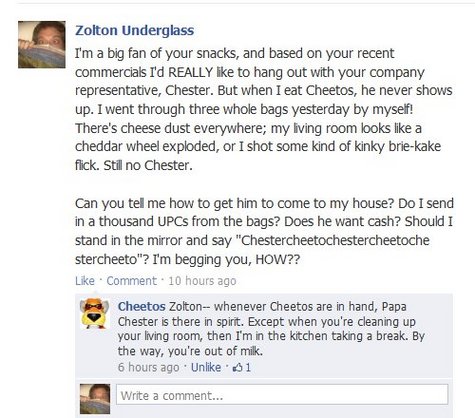 So he sees me when I’m sleeping, and knows when I’m awake. Does he know when I snort Cheeto dust like a cheddar-lovin’ crackhead?

That left me feeling a little ‘chapped’, naturally, so I reached out for some soothing relief. And while I haven’t heard from the company directly yet, I did stir up a real hornets’ nest with a waspish bee-cologically friendly fan: 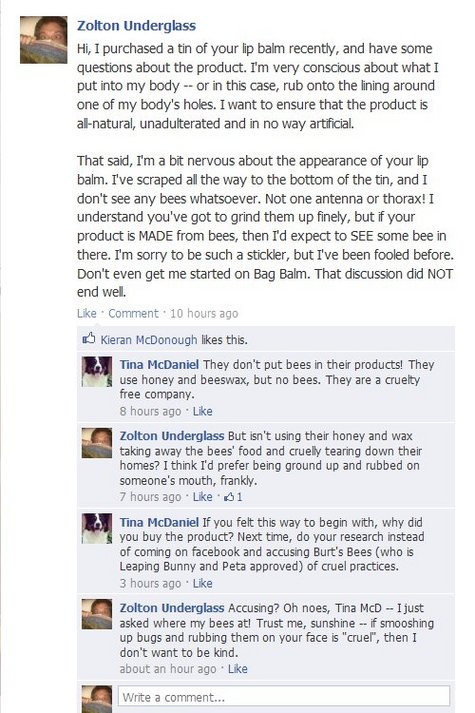 I needed a break, so I decided to take a nice relaxing drive. Then I remembered that’s not the sort of thing I do, and took an innocent hatchback out behind the woodshed instead: 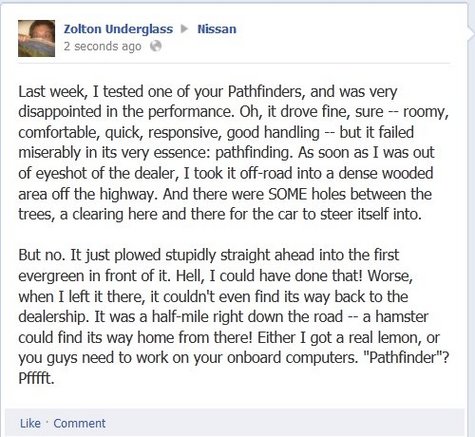 Maybe I should’ve tried a Subaru Forester. Or the Hyundai Lewisandclarkmobile.

Dejected, I dragged myself home and tried to make the world a better, greener place. But evidently I got gypped. Or I’m not wearing the right kind of magical underpants: 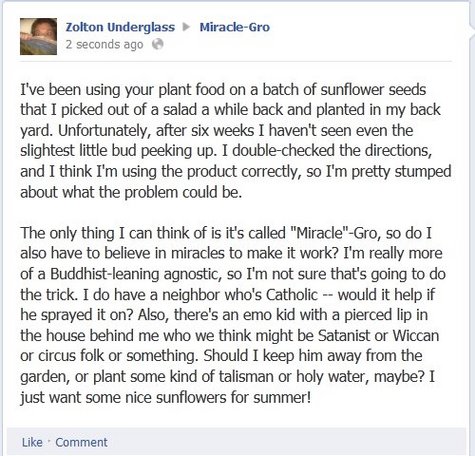 So maybe being a sheep isn’t all it’s cracked up to be. I guess jumping onto the bandwagon’s no good, if you crash it, rub it down with bees and get Cheeto dust all over the seats. I’m pretty sure I’m why the rest of you can’t have nice things. Baaaaaa!