If you’ve ever watched the Lion King or sat through a whole Sarah McLachlan commercial, you know how sad animals can get. And in today’s modern world, the critters have all sorts of problems — loss of habitat, hunters and poachers, pollution, fur traders, Ribwich restaurants, and so on. The last thing our delicate fauna friends need is to be co-opted into shilling useless products, chained up and paraded around as sullen corporate mascots.

From the Aflac wing-clipped duck to Tony the very-probably-endangered Tiger, there are ad animals quacking and roaring and inexplicably speaking in effeminate Australian accents practically everywhere you turn. Well, I’ve decided enough is enough, and I’m pushing back on companies employing some of the more exotic of Nature’s creatures.

(Well, not all the exotic creatures. GoDaddy has perfectly lovely commercials. I’ve got no beef with their kitty cats. Mreow!)

Read on for my animalistic objections — and the actual Facebook posts on real companies’ walls. I aim to succeed where the World Wildlife Fund and Greenpeace have failed. Or at least to get a new lawnmower out of the deal. Or maybe a teddy bear. Have a look.

What is important is that their fuel isn’t actually made of rhino. Or Ron Jeremy. Because that would be bad: 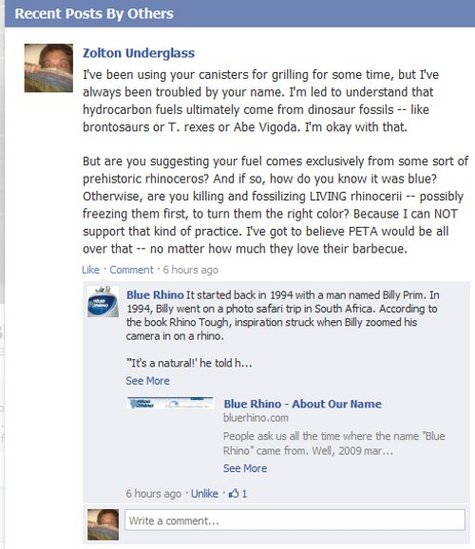 Note that the BlueRhino folks managed to respond in less than ten minutes. I appreciated that, personally. Ron Jeremy is probably embarrassed for them.

Next, it was time for a bit of lawn care. So I went right to the leader in grass-oppressing technology. Sadly, their performance left something to be desired: 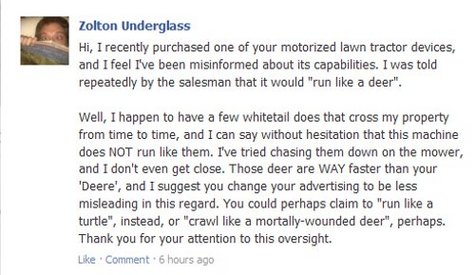 This was some pretty thirsty work, so I looked for a beverage to cool off with. Only, I wanted one free of scaly skink scat:

I retreated home, beaten and grizzly. Feeling bi-polar, I reached out to my yogi. But he didn’t answer — so I decided I’d rather just keep everyone away: 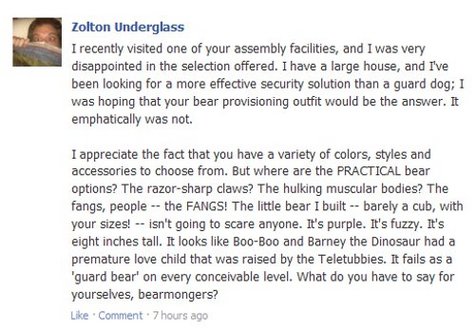 As usual, nothing went quite to plan. But I learned something about my propane, got the grass mowed (slooooowly), and I’ve got a new plush purple pal to play with. Maybe I’ll use him to wipe the iguana goo off those SoBe bottles. The little squirt’s got to be good for something, right?

Last week, Zolton nailed his Amanar and stormed the medal stand with 5-Hour Energy, Lipton Iced Tea, Mountain Dew, Pepsi Next and Coke Zero. Want to join in the prank? Click the links to see each real-life Facebook post, and comment or ‘Like’ them to generate more buzz. Or visit Zolton’s own Facebook page!