I don’t know if I’m the most patriotic person in my neighborhood. But if drinking beer and grilling dead animals for fourteen hours on a Wednesday in July counts as “luvin’ ‘Murrica“, then think of me as Uncle-by-god-Sam, because that’s what I’m planning on doing this Fourth of July.

Of course, just like no good country can stand on its own — we need places like Russia and Canadia and wherever the hell Rupert Murdoch’s from to make us look better — neither is a proper holiday barbeque a one-man affair. Or so I was once told, when Aunt Ginny found me alone in a darkened bathroom with a four-pound pork shoulder.

(Hey, applewood smoke and a zesty dry rub can do strange things to an impressionable young boy. I don’t know what to tell you. I only know old Ginny can’t hear the words “pulled pork” without shuddering involuntarily.)

The point is, I’m throwing an all-day holiday shindig, and I want to make sure my Fourth goes off without a hitch. So I got my facts straight by going straight to the source of people who really know how to party: Facebook.

Read on for my actual Facebook posts regarding the most important summer party products around — grills, meats, sunscreen and booze. Lots and lots of booze. And isn’t that what Independence Day is all about?

Whether you’re grillin’, golfin’ or gettin’ busy, you can’t party properly without the right equipment. So I moseyed over to CharBroil to ask whether they couldn’t set me up with a little more… oomph:

Of course, you’ve got to have something to put on the grill. And we’re all out of stray cats and nosy neighbors, so I picked up some chicken from Perdue. Which is good stuff, but I worried whether I was the right man for this poultry production. 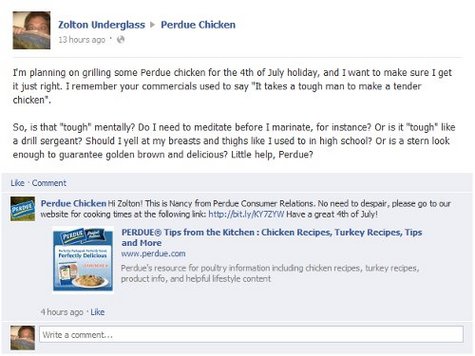 Of course, she didn’t really answer my question. So I’ve decided to beat those birds like they owe me money.

Or like they’re a sexy smoked pork shoulder. *ahem*

With all that time in the sun, I worried about protecting my guests. Coppertone was a natural choice — but if we spend all day greasing each other up and down, it’s likely to turn into a different sort of party, ifyouknowwhatimean.

Also, the neighbors tend to retch when my friends and I take our shirts off. A lot. So I inquired about alternative application methods: 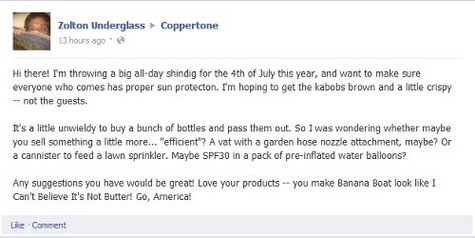 Finally, I got to the good stuff. Every celebration needs champagne, and who better than Taittinger to provide it?

(Lots of people, probably. But I couldn’t afford to prank Dom Perignon’s page. That shit is expensive.)

This being a patriotic party pageant, I wondered if I couldn’t get plastered on bubbly a little less monochromatic:

I don’t know if I got any real help from any of these Facebook yahoos, but at least I made a minimal, last-minute half-assed effort. Because that’s the American way.

Besides, we’ll all be too sunburned and full of chicken parts and champagne to give a damn how the party turns out. If we’re not passed out by the time the fireworks go off, we’re doin’ it wrong. I’m certain old Aunt Ginny would approve.