Zolton Does Amazon: Truth in Advertising

Zolton Does Amazon: Truth in Advertising

Things are not always what they seem. Even — shockingly — when it comes to advertising.

Now, I’m not trying to alarm anyone. After all, if you can’t trust your friendly neighborhood marketing professional, then who can you trust? Who else will give us the straight, unadulterated truth about our favorite household products? Anderson Cooper? Fox Mulder? Santa Claus? Dream on.

Unfortunately, the occasional corporate ad weenie does go astray. They fall victim to the siren song of the perfect jingle or catchy top-of-the-lungs hyperbole, and wind up telling us something that simply isn’t true. I know, I know. It’s shocking.

That’s where I come in. Today, I’m testing the commercial claims of several edible goodies I bought from Amazon.com, to find out whose ads are on point and whose pants are on fire. Don’t blame Amazon for the lies, damned lies and marketing that follow. They’re just the delivery mechanism.

Orbit commercials say that no matter how dirty you get, their gum will give you a “clean mouth.” I couldn’t think of anything dirtier than the cold slushy flowerbed outside my building. So I went outside, waggled my face around in it for a while, and popped a piece of spearmint to test it out.

On the good side, the flavor of the gum lasted quite a long time. On the bad, so did the taste of crabgrass, wet dirt and Miracle-Gro. Also, I was pulling chunks of fertilizer out of my teeth for the rest of the day. Not exactly the “winter green” I was hoping for. 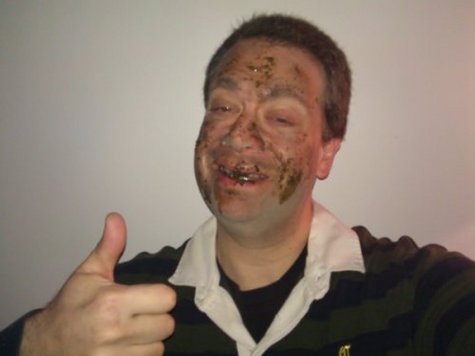 What? Do I have something in my teeth? Spinach? What?

In short, Orbit gum did nothing to provide me a “clean mouth.” As far as I’m concerned, whoever made those commercials are a bunch of bubble-thumping smock-tucking picklejacks.

“Red Bull gives you wiiiiiiings.” All their TV and radio and print ads say so. And not figurative “wings” like “earning your wings” or panty liner wings, either. Real, honest-to-Icarus wings. It’s in every commercial. But it is really true?

To find out, I climbed up on top of my buddy’s garage with this 24-pack. To make the experiment scientific, the results had to be reproducible, so I paid my buddy and his two brothers ten bucks each to climb up with me. We drank two cans apiece, waited five minutes, and took a soaring leap off the edge. Like a quartet of Supermen, we prepared to fly.

And like a foursome of Incredible Hulks, we plummeted head-first and butt-deep into the snowbank beside the garage. We didn’t soar like eagles. We didn’t even float like hummingbirds. We sank like frozen turkeys. Frozen upside-down turkeys. 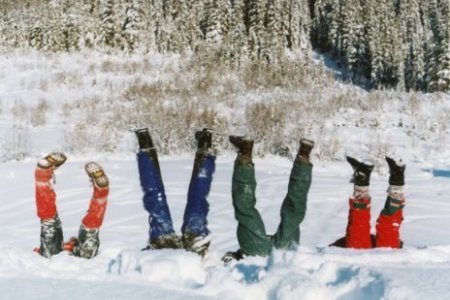 I’m the one with the spectacular calves. Also, the debilitating head trauma.

So, “wings”? No. “Red Bull gives you whiiiiiiiplash,” maybe. Wings, not so much.

The ad wags at Snapple tell us their tea is “made from the best stuff on Earth.” Fair enough. But saying so is one thing. Subjecting a sample of their beverage to rigorous scientific scrutiny using an industrial mass spectrometer, it turns out, is something else entirely.

I called in a favor from a friend who works at a molecular testing laboratory, and we got to the bottom of Snapple is indeed made of. Apparently, the component analysis identified compounds consistent with natural substances — like those in tea leaves and peaches, for instance. 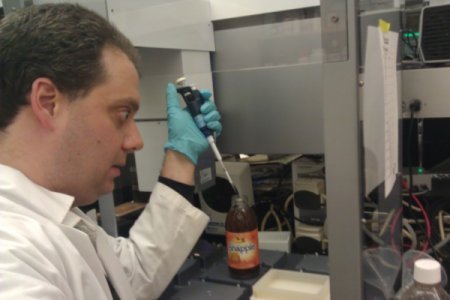 Some scientists work to cure cancer, or wipe out disease. Dr. Zolton prefers to work on “The Snapple Solution.”

However, the analysis did not find ANY discernible traces — at parts-per-billion sensitivity levels, mind you — of Cuban Cohiba cigars, Miles Davis’ Birth of the Cool, or the dancing outfit Salma Hayek wore in From Dusk Till Dawn.

So it’s clear — nay, it’s scientific *fact* — that Snapple is NOT made from “the best stuff on Earth.” But for tea — sure, it’s pretty tasty.

I know that laughter can be contagious. And the little heifer on the Laughing Cow package looks like she just heard a real udder-slapper of a doozie. But the “have you laughed today” slogan? Can a nibble of cheese really give you the giggles? I doubted it.

I tried some on a cracker, and felt myself chuckle. Another bite, and the yuks kept coming. By the time I was halfway done, I was cackling like a hyena hopped up on laughing gas. The cheese was tasty enough, but the experience was sort of uncomfortable.

(If you’ve ever laughed so hard you shot milk out your nose, take a word of advice: it’s a whole lot easier in the liquid phase. Upsnorting cheese feels like passing kidney stones through your nostrils — and everything around me smelled like a wedge of cheddar for a week.) 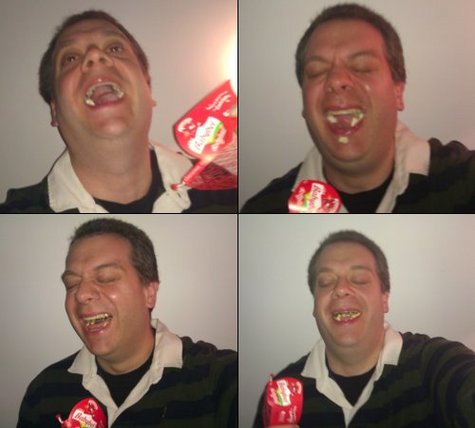 Why yes, that is string cheese in my pocket. AND I’m happy to see you!

To my surprise, this is one product slogan that’s actually true, in an unnerving sort of way. It’s delicious with crackers, but you might want to try pairing it with a sad movie or a funeral dirge. Or a Heimlich maneuver. Otherwise, it may be the cheese that has the last laugh.