Zolton Does Amazon: To Catch a Thief

Zolton Does Amazon: To Catch a Thief

They say when it rains, it pours. And sometimes life just unzips and drowns you like a urinal cake in a rogue tsunami. That’s how it’s been at the office lately.

There’s plenty enough to worry about on the job during the best of times. My meeting calendar looks like a poorly-conceived game of Tetris. As a semi-professional smartass, I’m always this close to some sort of workplace lawsuit — harassment, slander, libel, take your pick. And there are only so many medical emergencies I can pretend to have to use up sick days.

(I’ve “had” five bouts of pneumonia, eight gallbladders removed and a half dozen Lyme disease scares. And that was just September. Last week, the HR lady asked me if my spouse’s name is “Typhoid Mary.”)

Avoiding actual work has become like a full-time job lately. And to top it off, I’ve now been struck with that most insidious of office nuisances: workplace theft.

Every day, I’d find something else missing at my desk. First, it was Post-Its. Then my three good clicky-top pens. Mousepads, headphones, those emergency airline bottles of gin in the bottom drawer — all gone. If it wasn’t physically nailed onto the desk, it was apparently fair game. Soon I was left with little but the naked keyboard, mouse and computer the company gave me to do work on. And homey don’t work like that. 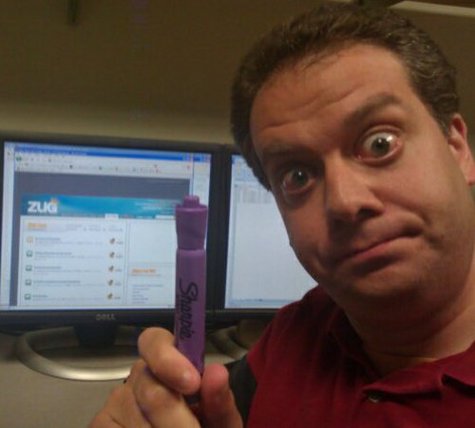 This is all I have left to write with. Does it LOOK like a clicky-top pen? WELL, DOES IT?!?

I resolved to fight this sticky-fingered felon, and to protect what precious little stuff I had left. Of course, to do it, I needed more stuff. Good stuff. Crime-busting stuff. So I put that “work computer” to good use on an Amazon shopping spree. Here’s what I came up with:

This little gem was just the ticket. Not only would I stop the thieving hound from taking my stuff — I’d catch him red-handed on tape, to boot. And then … well, I don’t know what then. Maybe I’d turn him in to the cops for a good beating. Or let the company send him to some sort of anti-theft deprogramming cult. I could torture him until he told me where he put my precious clicky-tops. The possibilities were endless.

And this camera is fantastic. I dug through my pocket change to confirm the picture — and it really IS the size of a penny! I hid the camera on a shelf in my cubicle and waited for the corporate cat burglar to strike again.

Which he did, apparently. When I came in the next morning, the camera was gone. And he took my pocket change, the weaseling little jackhole. In place of the spy cam, he left a little doodle of a camera. On one of MY Post-Its that he stole the week before.

Of course you realize, mystery smuggy-face pilferer: THIS MEANS WAR.

I decided rather than get mad, I’d get even. Or I’d get mad, and then get even. Actually, I got mad, had lunch, slept through a staff meeting, and THEN worked on getting even. But oh, would I get even.

The next time that felonious fink slithered by to swipe my stuff, he’d get a nice angry jolt from this electrified stapler. I gave it a “test run” at my desk, and it delivered quite a wallop. I actually think I may have peed a little. Just to be safe, I swapped chairs with the next cubicle over.

Then, I set my trap. I didn’t want another dose of lightning myself, so I used a set of tongs to place the stapler in an innocent-looking position on my desk, just waiting to be stolen.

I returned to find the stapler still there the next morning, and no thief writhing in agony on the floor beside it. Disappointed, I reached for the tongs to move it safely away — and a lightning bolt ran up my arm and punched me square in the nose. The son of a Tesla electrified my tongs — the nerve! I picked up the closest thing on my desk to throw in a fit of rage — which happened to be the stapler, and I buzzed myself again.

In related news, the office is quickly running out of unstained chairs. Somebody should send out a memo or something.

I figured this would stop the thief in his tracks. These locks are made of metal strong enough to resist a blowtorch and jackhammer sandwich. You could floss a great white shark with one of these babies. Anything I wanted to keep, I’d just loop this thing through, hook it onto the computer, and be all set.

Unfortunately, I wasn’t paying close attention when I set it up, and completely forgot to look up the default combination on the instructions. Which wouldn’t have been a problem, but I REALLY wasn’t paying attention and accidentally looped the lock through one of the belt loops on my pants. Which meant I wasn’t going anywhere further than eighteen inches away from the desk, unless someone happened by with a diamond-studded chainsaw to cut me loose. And the instructions were just where you’d expect them to be — in the trash can, eight feet away.

I played it off for the rest of the day — said I was staying at my desk for lunch. Missed the all-hands staff meeting in the afternoon. Had a VERY interesting conversation with the firemen who came when the alarm went off. But I got through the day. and when everyone had left I slipped out of the pants and escaped.

Of course, they’d emptied the trash by then, so I still don’t know the combination. And now I have a pair of Levi 501s permanently draped over my monitor. On the bright side, I guess, at least the thief hasn’t managed to steal THOSE.

Finally, enough was enough. I bought six cases of this sticky goo and pasted every single item left onto my desk. Permanently. That’ll teach some thieving no-good to pilfer my stuff — just try taking something NOW, tough guy. 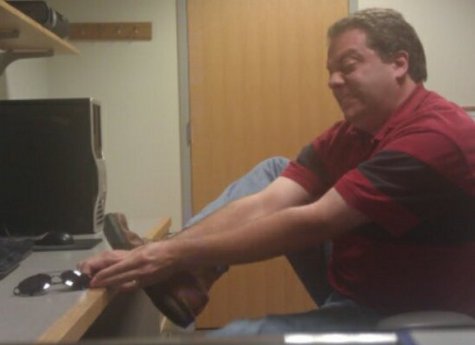 In retrospect, “protecting” my sunglasses may not have been the best idea.

Of course, I couldn’t actually work any more, what with the mouse glued to the pad and the pad to the desk. Or all my notebooks stuck in place, or the telephone permanently fixed in its holder. But none of it disappeared, either. That’s what you call a “tie.” And I’ll settle for a standoff, every time.

At least, I would have. When I got to the office the next Monday, the whole freaking desk was gone. Maybe it was the thief, maybe the boss figured out that I was doing even less than usual and sacked me. I didn’t stick around to find out — I took one trip around the cube farm, grabbed all the Post-Its and mousepads and clicky-top pens I could carry, and got the hell out of there.

Hey, if they didn’t want me taking stuff off their desks, they should have bought six cases of Krazy Glue. This is how we learn, apparently. 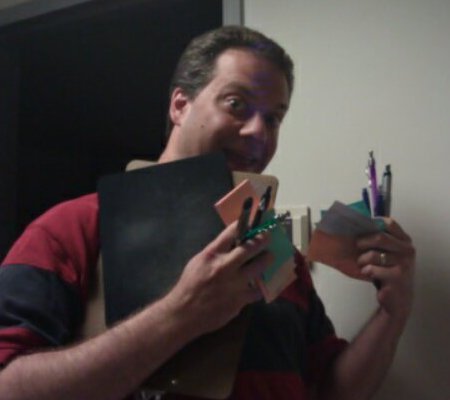