← Zolton Does Amazon: To Catch a Thief  |  Prank Reviews: Zolton’s In Yer Facebook →

Sometimes trouble has a way of sneaking up on you when you’re not looking.

Other times, trouble arrives with all the subtlety of a diesel-fueled Amtrak. It doesn’t especially care whether you’re looking or not; you’re getting sucked under the wheels of the 10:15 express either way. Like last week, when my wife asked:

“Well, my mother’s coming to stay with us this weekend. Surprise, anyway.”

Turns out the old girl was having a pretty hectic time of things lately, and needed a couple of days away for some “R and R.” And she chose our house for it. Which led me to wonder aloud whether “R and R” stood for “Reproaching and Recriminating.” The train conductor was not amused. 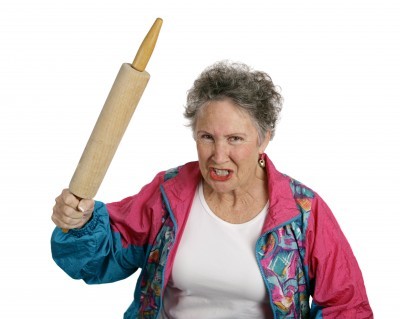 Mother-in-law identity has been changed to protect … ah, hell, who am I kidding? NOBODY is innocent when a mother-in-law is involved.

I was instructed in no uncertain terms to be on my best behavior, and to make the mom-in-law “feel welcome and comfortable in our home.” Unfortunately, I didn’t know exactly what it takes to make a member of the over-50 club “comfortable,” outside of getting my damned hair cut, turning down that rock-and-roll racket and getting the hell offa her lawn.

Lucky for me, Amazon had everything I needed to give my mother-in-law a proper sort of welcome. And they shipped it out faster than an octagenarian snapping up crab legs at the Early Bird buffet. Welcome to my weekend:

I got tabbed to pick my mother-in-law up from the airport, and figured some nice soothing music from her generation would be just the ticket. Never mind that I was a couple of decades off on “her generation,” or that she says she’s into current pop — all old people like Lawrence Welk, right?

I thought she might be hard of hearing by now, so I turned the volume way up on the polkas. I don’t know what passed for dancing back in the old days, but she sure jerked and gyrated around in the passenger seat, all the way home. If I hadn’t known any better, it almost looked as if she was screaming and clawing at the window, trying to get out. Maybe that’s what they called the “Charleston.”

I didn’t get to hear any of the polkas myself — I had earplugs in to dampen the noise — but after her jitterbugging in the car, I told my mom-in-law that if she wanted, I’d take her for a long ride every day to hear some more of those tunes. She nearly collapsed just at the thought of it. I guess a little dancing really takes it out of the old folks.

I was under strict orders from the missus that her mother was NOT to be disturbed during her time with us. So I posted this tape all over our door, through the condo hallway and in a big huge “X” over the guest bedroom door.

When she saw it, my mother-in-law looked disturbed. I explained that the tape was just there to keep out the riff-raff. No one would dare come looking for trouble with this kind of warning in place.

She didn’t seem entirely convinced. “Are you sure you’re not just trying to suggest that I have PMS?”

“Goodness, no — nothing of the kind. I would never dream of implying such a thing.”

In related news, while this product hangs nicely I wouldn’t recommend having several feet of it forcibly shoved down your throat. As bright and zesty as it looks, the taste leaves much to be desired. 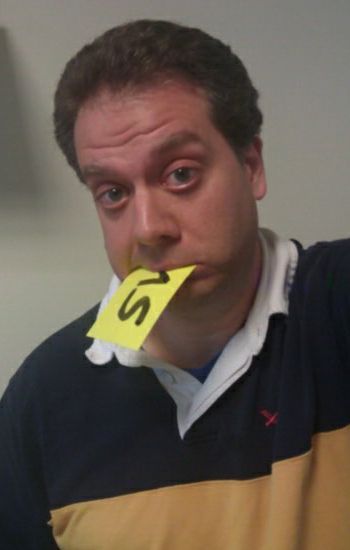 Maybe with some nice pesto and an amusing merlot, it could work. For now, it just tastes like “crow.”

There’s nothing so relaxing as curling up with a nice puzzle, and I thought that word search would be right up my mother-in-law’s alley. After all, she uses words all. The. Time. Non-stop, practically. And time spent hunting for words is time not spent detailing how much better her daughter should have done than me.

Sadly, I shot myself in the proverbial foot by buying the large-print old peoples’ version. When there’s only one letter per page, ferreting out the words like “a” or “I” doesn’t take nearly as long as I hoped it would. Which left plenty of time for mom-in-law and me to “chat.” 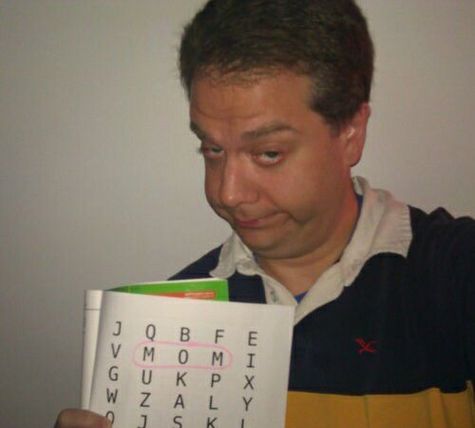 I ask for a “diversion,” and you send me this, Amazon? Really? No, REALLY?

Wherein I learned that if not for me, her daughter would have won a Nobel Prize by now. Also an Oscar, a Pulitzer, and a card for free Denny’s Grand Slam breakfasts for life. And she’d be married to an astronaut.

I was so excited to bring this out, I could hardly wait until the 4:30pm dinner hour was over. I rushed into the living room to set up, and was soon calling out numbers like a Saturday night pro down in the Baptist church basement.

Unfortunately, by the time I got my Bingo game on I was interrupting the show my mother-in-law was watching. And hell hath no fury, apparently, like a woman who wants to see her Matlock stories on the TV. She grabbed the bingo balls from me during a commercial break and pelted me into submission. I took an N-32 to the gut, and there’s still an imprint of O-66 on my forehead. We never found B-7. It either rolled under a couch, or I’ll be passing it in a couple of days.

Either way, I think I’m done with Bingo for a while. But my mother-in-law says she feels like a million bucks now; winging balls at me is the most fun she’s had in years. And she’s coming back to stay next weekend.

I wonder if Amazon has time to deliver an athletic cup and extra-strength aspirin before I get Bing-O-bliterated again? 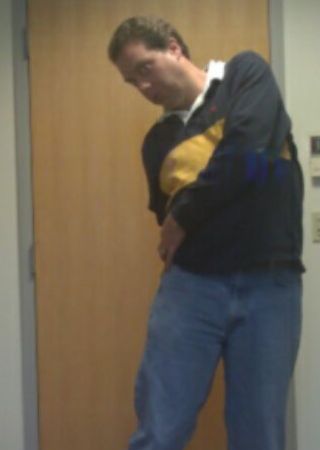