You would think my dog would be grateful. I rescued her from the local pound, after all, and gave her a good home. She gets a warm blanket to sleep on, three square kibbles a day, and treats that would make the ritziest French poodle drop a jewel-encrusted turd in envy. I barely even beat her, if there’s anyone around who might be videotaping it. You’d think that would count for something with the stupid flea bag.

You would be wrong.

Instead, little miss “Princess Paws” is constantly out to get me. Last week’s “tasty food” is this week’s “inedible garbage,” while this week’s actual garbage is evidently a gourmet treat. She pees when I’m sleeping, sleeps when I’m ready to walk, and can even pee while sleepwalking, which covers all the bases without requiring my involvement at all. 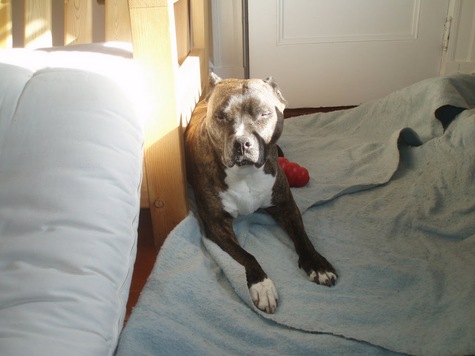 The “Princess,” in repose. And probably a puddle of her own urine.

I can’t even beat her with bribery. She’ll wag for twelve seconds — or less — over a new toy, then banish it to the forgotten pile of chewable dreck, never to be gnawed on again. I have more drool-spattered rawhide and rubber strewn around my place than a spaghetti Western oral fetish club.

Still, I try. I cling to the vain hope that somewhere out there, the perfect pooch paraphernalia exists. And if it does, I figure it’s probably sold on Amazon. Have a look below for my latest (failed) attempts to mollify the mutt, and for my real live Amazon reviews of the products I bought to tempt her. If they only sold dogs on Amazon, I wouldn’t have this problem in the first place. But they don’t.

They do sell Vietnamese cookbooks, though. Someday, you mangy little cur. Some. Day.

I had high hopes for this toy. With all the interesting shapes and colors and bouncy fun, I thought the dog would be all over it. Instead, she was “over it” before I even got it out of the package. There’s no accounting for dog snobs.

I tried to sweeten the deal by putting treats and food inside the ball, hoping she’d bat it around for a while trying to get them out. No such luck — she found it on the floor, took one swift lick around the middle to slurp all the morsels, and promptly kicked it under a couch. I keep bringing it back out to play with, but she has zero interest in the thing.

Or so I thought. This morning, I found it by the front door. The dog somehow got hold of my keys and jammed them inside — and now I can’t get them out. I tried pulling it, stretching it, bending it — even licking all around the inside — but I’ve got nothing. Except a “sick day” taken at work because I can’t leave the house, and breath that smells like metal and Alpo. I feel like I just French-kissed K-9. Not so nice. 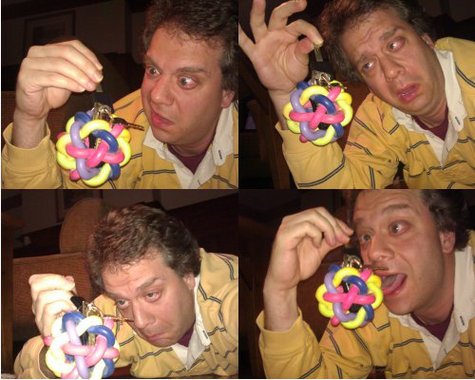 Seriously, how do you do that without opposable thumbs? Does the dog have David Blaine on fricking speed-dial?

I bought a bag of these biscuits, thinking I could coax the mutt into good behavior through “positive reinforcement.” Though the idea sort of fizzles when the dog is too finicky to eat the stupid things. She gave the tiniest of disinterested exploratory sniffs, then scrunched her furry little schnozz like I was offering her a handful of barf-encrusted crap.

(Which, based on her previous dietary choices, she would actually eat. Tasty baked tidbit? No, thanks; I’m trying to keep my greyhoundish figure. But the poop du jour in half-digested BLEEEH-rnaise sauce? Mmmm-mmmm! Bon appeturd!)

I tried to entice her, but she wasn’t having it. I even tried a little nibble myself, to prove I wasn’t trying to poison her. (Yet.)

And actually, the biscuit was pretty good. It’s got a nice crunch, with a taste somewhere between a heavy water cracker and reconstituted horse meal. But pretty light on the “horse meal” part. All in all, not bad. I’d give it about a four on the people-food scale — somewhere between a stale bag of Funyuns and a plain rice cake eaten off a sweaty Clydesdale’s back. I finished the first one and had another. Pretty soon I’d gone through half the bag. 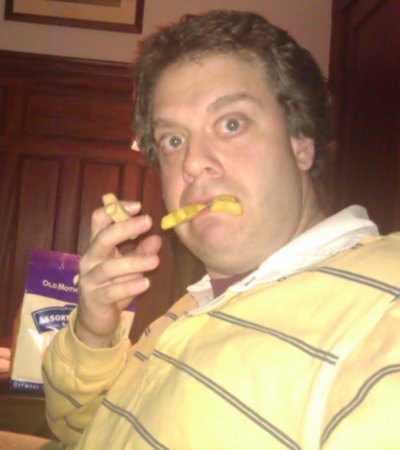 Oh, don’t judge me. What do you think your precious “Chicken” McNuggets are made from?

So this was a complete waste for the dog. But I found a new snack for TV nights. Now if I’m out of popcorn, I set out a bowl of biscuits and munch away. They’re not gourmet. But they’re filling, and I’m getting my recommended daily allowance of hoof meat all in one sitting. That’s a winner.

This seemed like a good way to save what’s left of my poor carpet. Instead of the dog dive-whizzing the rugs, she could have a nice comfy patch of “grass” to water. I laid the mat out and waited for magic to happen.

Magic happened, all right. All over the carpet. I cleaned it up and tried again. This time, I set the dog ONTO the mat. As if on cue, she immediately lifted her leg.

And peed a tight stream three feet away, onto the coffee table. I wiped that down, and gave it another go. “Come on, girl, get it right!”

She got it right, all right. Diddled right of the pad, and right onto my shoe. By now, I was losing my cool. I tried to reason with her: “Look, you, I know this thing works — it’s ‘SEEN ON TV’!!”

She peed again. ON THE TV.

I don’t know how this thing is supposed to work, but I finally figured out how to keep the dog from soiling the carpets — I just bought eighty-two more of these things, and I’ll cover every surface in the house with them. If she won’t pee on them, she won’t pee at all. Score one for me!

All dogs like balls. Whether chasing, chewing or licking — and whether their own or someone else’s — what dog can say no to a nice game of fetch with a happy fun rubber ball?

Try as I might, I couldn’t get her interested in this product. And I tried everything. I rolled it to her. I rolled it away from her. I dangled it over her head, buried it in her food and tied it to the back end of that Schnauzer across the street she likes to trade sniffs with.

Nothing. It’s like her ball-chomping gene has been removed or something.

Not her “temperamental” gene, though. Last night, I was trying again to get her interested, waving the ball in front her like a manic rubber hummingbird. She finally had enough, batted the ball hard out of my hand, and it hit me right in the mouth. And stuck there. It took me half an hour to dislodge it from my jaw, and another before I could close it properly. 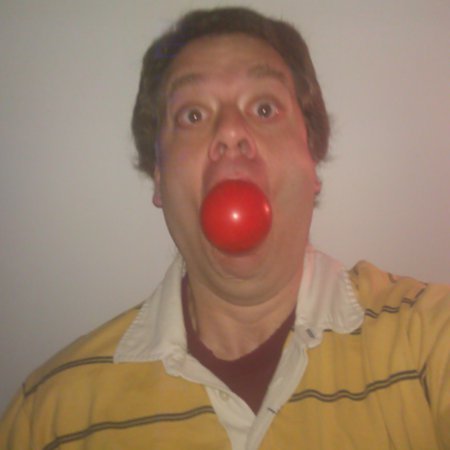 Hey, is there something stuck between my teeth?

So I’m giving up on this toy. Next time I try to get her to show interest in something, it’ll be a tuna fish sandwich on rye. I look forward to that.