There’s just something about wintertime in New England. The brisk subzero temperatures, the refreshing hurricane-force gales, the serene majestic drifts of fallen snow. It’s romantic — like a scene right out of Currier and Ives.

That is, until you shovel nine feet of white crap off your steps, lose a boot and three toes trudging ass-deep to your car like some sack-race Eskimo, then get plowed in behind a gaggle of gormless yuppies who can’t drive their hybrid solar smugmobiles in the snow. I’m freezing my moobs off over here, I haven’t had feeling in my fingers since December, and if my testicles ever thaw and crawl back out of my abdominal cavity, Currier and Ives can take turns sucking them. New England winters? Humbug.

I bought three of these bottles, HOPING that it would dispense real lava. Or at least something very, very hot. Like boiling oil, or molten steel, or Eva Longoria.

No such luck. All that squeezes out of this thing is SOAP. And the package sat on my porch all afternoon, so it’s really cold, almost FROZEN SOAP. I might as well have dipped my hands in soft-serve ice cream. If anything, using this product actually made me colder.

On the bright side, my hands did get impressively clean. If any fingers actually survive the frostbite, that’s going to be sweet.

I bought this product because I’d seen quite a few people wear them who really seem to know how to stay warm — hard-core skiers, armed robbers, people from British Columbia.

On the plus side, it does keep my head pretty toasty — but only if I really pull the drawstrings tight to keep the cold air out. Unfortunately, I can’t see much out the little hole in the front when I do that, so I tend to run into a lot of things while I’m wearing it — snow banks, busy intersections, and in one rather unfortunate case, my local bank branch. 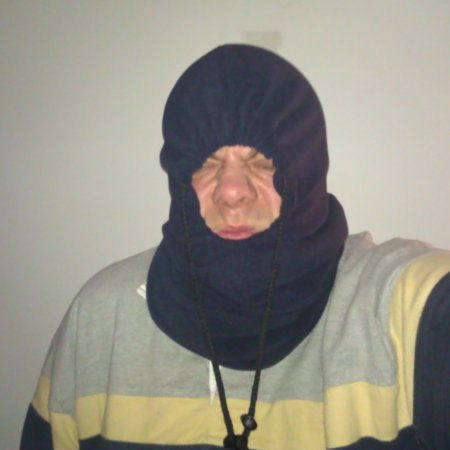 The last time I saw the world through a hole this small, a birth canal was involved. Just don’t ask me whose.

Everything got sorted out when the cops arrived — they agreed that “premeditated robbery” and four inches of visibility in front of my face probably didn’t mesh — but it was embarrassing, nonetheless. Maybe these should come with some sort of warning. Like a nice “THIS IS NOT A STICK-UP” embroidered on the neck, maybe? I’m just spitballing here.

I’ve always liked that warm feeling from slipping into a freshly-pressed shirt or pair of slacks. What better way to warm up after a hard sidewalk shovel, I figured, than a quick steam job on my clothes … while I was still wearing them. The wrinkles come out, I can feel my nipples again — that’s a “win-win” in my book. 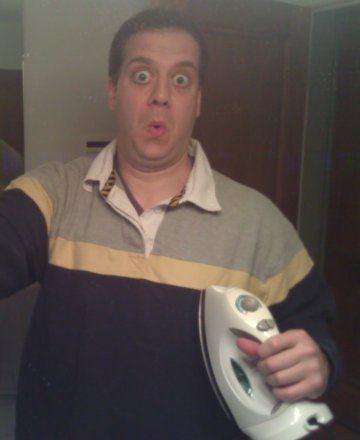 “I’ll be out soon, honey — I’ve got some pressing matters to attend to.”

In practice, I have to say I had mixed results. A quick glide across the chest or knees felt pretty good. But there are places on your own worn clothes that you can’t — and a couple more that you SHOULDN’T, ever, really — reach with a screaming-hot 1700-watt iron. And while I can’t say that my outfit was any less wrinkly when I was done, I was definitely warmer than when I’d started. A lot jumpier, and possibly branded like a prize steer, but still — WARMER. Solid product.

I’ve always heard that if you warm up on the inside, then the outside will follow. So I bought this bottle of El Yucateco and saved it for the next inevitable snowstorm. When I was done shoveling and still shivering, I opened it up and slammed it down the hatch — all eight ounces.

First, a few words about the taste: El Yucateco red has a nice tangy element, lingering through the forward habanero kick and beyond. The additional spices play well with the primary pepper, adding a savory depth that’s more than just (considerable) heat or capsaicin jolt. The tomato base and hearty thick texture promise a richness and complexity of flavor that is delivered quite nicely to the palate. 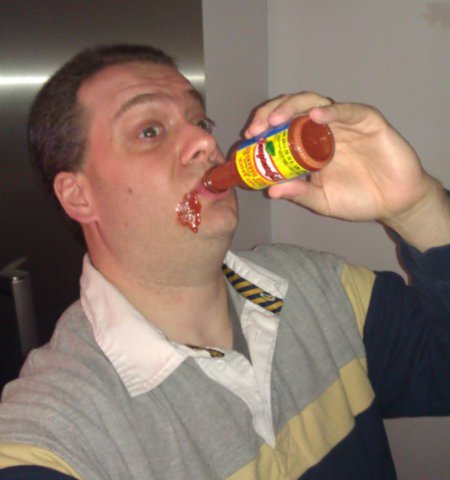 The journey of a thousand burning poops begins with a single chug.

Overall, I’d say this would make a very nice complement to a variety of Mexican or South American dishes, as well as grilled meats, starchy vegetables or as an extra kick to, say, garlicky green veggie side dishes. Also, it’s unlikely that I’ll be able to sit down without searing pain for at least a month. So “use in moderation” is the take-home message, I suppose.

One Response to “Zolton Does Amazon: Hot! Hot! Hot!”