Sometimes, you have an itch that just needs to be scratched. Me, I recently had a scratch, but couldn’t find an itch. Where by “scratch” I mean “three gallons of sticky pink goo.” And by “itch” I mean … well, I’ll explain.

A few weeks ago, my Aunt Martha sent me a case of extra-strength calamine lotion for my birthday. Why? Who the hell knows? Maybe she finally went senile, or she thinks I’m a severe poison sumac risk. Maybe she had it left over when that godawful rash on her neck finally cleared up. The woman wore a V-neck blouse at the last family reunion; it looked like she was drowning in cranberry sauce quicksand.

At any rate, I had the calamine. And I needed to know if it was the good stuff. I wouldn’t want to be doused in some topical irritant or caught in a crazy mild eczema emergency and have doubts about my relief juice. So I needed a test. A trial. An itch:

The way I figured it, you can buy just about anything on Amazon these days. Why not an itch? 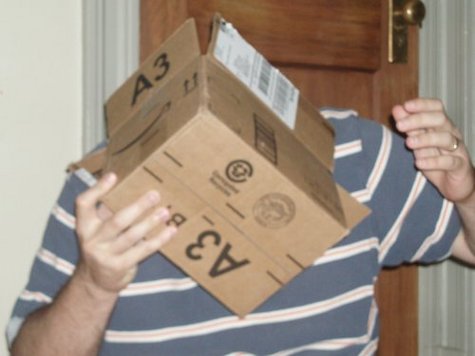 You can get anything in the world from Amazon. Except “dignity,” apparently.

So I hopped online and did some shopping. Here’s what I bought, the reviews I left on Amazon, and where my itch for an itching (finally) got scratched.

I’ve always heard rumors that flannel pajamas can be itchy, so I ordered this product post-haste and eagerly awaited the delivery. When the package arrived, I immediately threw off every scrap of my usual attire and snuggled into the pajamas right on the spot. The FedEx driver seemed a bit taken aback, but there was birthday calamine to be tested so I paid him little mind. I wore the pajamas over a long three-day weekend — non-stop, indoors and out, no exceptions — in an attempt to build up a really proper flannel itch. Also, to encourage the neighbors not to speak to me quite so often.

Unfortunately, at the end of the experiment I found the pajamas to be uncomfortable not from itching, but rather from shrinking. They’d gotten soaked during a Friday thunderstorm — and my daily baths, of course — and shrunk nearly two full sizes in the three days I wore them. And it was awfully hard to tell if my legs or back were ‘itchy’ when it was difficult to feel them at all from lack of circulation. I finally cut myself out of them, but the calamine remains untested. At least the neighbors keep their distance lately.

I purchased this item on the basis of poison ivy’s long-standing reputation as a reliable itch inducer. Sadly, I failed to realize that the product is not, in fact, clippings and leaves of the famous plant, but rather a popular film of similar title. Rubbing the DVD and the case on various body parts failed to provide the mild itch I was hoping for, so I tried watching the movie instead. 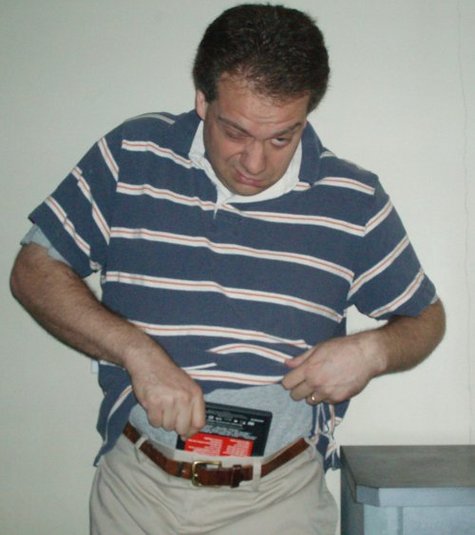 Drew Barrymore and Sara Gilbert were down my pants for ten minutes, and I still don’t itch? UNPOSSIBLE!

Sure enough, within ten minutes my skin started to crawl — but where exactly do I apply the calamine to relieve it? I practically bathed in the stuff, and still the creepiness remains. I’m beginning to think my lotion is past the sell date.

And what better way to test “itch relief” than on a bag with comes with an *indicator* of how itchy it is? I bought this tote as soon as I saw it, and couldn’t wait for it to arrive at the house. When it finally did, I tore apart the package, opened the bag, and dumped two bottles of calamine directly inside. I then set it nearby in a cool quiet place to observe how quickly the “itchy” indicator would fade. Disappointingly, though the lotion promised “immediate relief,” an hour came and went with no apparent fading of the logo. Overnight, and no change. Two more bottles went in. Nothing. Filled it to the brim with the soothy pink stuff. Zip. 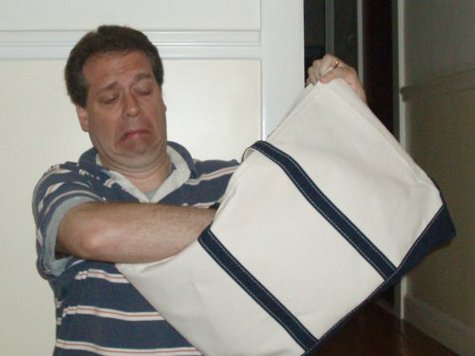 What’s white and itchy on the outside and pink and gooey in the middle? This tote bag. Also me, come to think of it.

As a last resort, I tried applying calamine directly to the logo. I wiped it all over the outside of the bag. Did it get less “itchy”? No. It just got gooier and pinker. Clearly, the calamine is defective. Still, good bag. 4 stars.

I’d heard that sandpaper can be successfully used to cause skin irritation — fraternity hazing rumors back in college, mostly — and based on other positive reviews, decided to give this product a try.

I learned a few things on my first usage of the product, the most important being that “ORBITAL SANDERS” ARE NOT MEANT FOR THE ORBITAL BONES AROUND THE EYES! I would go further to say that this product should probably *not* be used on any part of the face whatsoever. Certainly not the eyes. Or the cheeks. Or what’s left of the earlobes. Those places, for sure. I might suggest to the manufacturer that a “do not use near eyes, cheeks or external ear danglies” warning be placed directly on the packaging, or on the paper itself. I can’t be the first raw oozing citizen to make this simple sanding mistake.

Well, that went peachily. Four products, some nervous neighbors, several Band-Aids, half a movie I can’t unsee and a tote bag full of what looks like Hello Kitty piss. And any itching? Nada. So I took a different tack, and finally found the answer:

I received a full case of extra-strength calamine lotion for my birthday recently, and decided to give it a test run. I wouldn’t want to be doused in some topical irritant or caught in a crazy mild eczema emergency and not know how much to apply!

I purchased several packets of this product and applied liberally — nay, cavalierly — to every exposed body surface I could reach. I even exposed a few extra surfaces, to ensure a proper experiment. And found a couple that I never knew existed before. Anatomy was never my strong suit.

Sadly, I found that the pink liquid I thought to be calamine was instead Pepto-Bismol, which turns out to be essentially useless in relieving discomfort on the *outside* of the body. On the bright side, this itching powder is _diabolically_ effective, and the Pepto is at least managing the ulcers I’m developing from four days of constant scratching. Four stars. 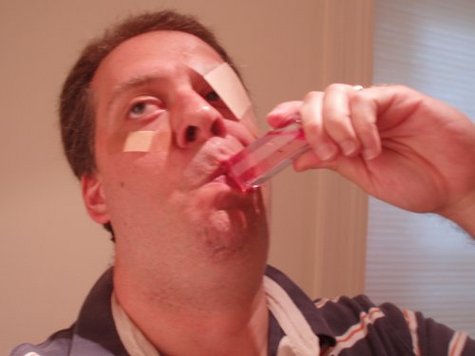 This pink stuff works for tummy aches. So it fixes massive cranial bleeding too, probably, right?

So there I was, with enough itching powder on my person to tickle a woolly rhinoceros to tears. So I did what any sane person would do in that situation. I cued up the rest of Poison Ivy and plugged the sander back in.

Creepy and bleeding ain’t great, but at least it distracts me from the itching. I guess I know what to ask Auntie Martha for next year.