I’m approaching a milestone: as of today, I’ve been writing parody Amazon reviews for exactly one full year.

I looked back on my dozens of live Amazon reviews, and the feedback they’ve received — nearly 800 “helpful” votes, a reviewer rank in the top 10,000 of all Amazon users, and numerous comments, some of which aren’t along the lines of “Is this some kind of dumb joke?” or “Precisely what flavor of douchebag are you?” And as I reveled in the adulation, one fact became quickly clear.

I needed to celebrate. 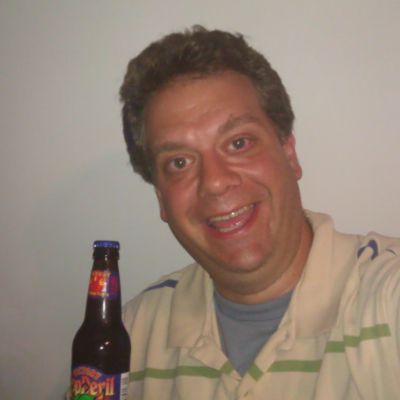 All I want is a bottle of beer, a loaf of bread, and thou. Also, get thou’s ass in the kitchen and make me a sammich outa that bread already.

I only know one way to celebrate, and that’s to put down my measuring calipers and reviewing pen and crack open a beer. But this being a special occasion, I wanted to savor the moment — by which I mean, the beer.

So I went to Amazon to find products that would help me appreciate my celebratory sudsy treat. And just in case you’d like to raise a glass with me, I’ve given the Zolton once-over to the following items. Read on for my actual Amazon reviews of some of a beerophile’s best friends. And thanks for reading all these reviews, for an entire calendar year. You get four stars out of five in my book, any time. Salut!

My favorite part of beer is the hops, so I figured this kit would be a dream. I’d be transported — as though some bottle-fermented Calgon had taken me away — to the Bavarian highlands, or sunny California, or whereever else hops are grown and harvested. Tahiti? Poughkeepsie? Outer Mongolia? That’s why I needed the kit.

Sadly, it appears to be the brewing process that renders hops so delicious. The hops included in this kit are earthy, bitter, grassy and have no business accompanying a nice cheese pizza or plate of hot wings. You’d have thought I’d learned my lesson after the disaster tasting Live Cultured Yeasts of the World a few years back, but no. I bought this kit, too.

On the bright side, I do think it’s developed my palate. If ever there’s a danger of lemon-soaked sweatsocks contaminating the world’s escarole supply, I’ll be able to tell what’s been tainted. Just don’t ask me to boil it down and chug the juice over a plate of bratwurst. I’d sooner go back to the yeast.

The first step in appreciating a good beer is opening it the right way. This doodad is what the pros use, so I figured I was in good hands. Until I remembered I’m not a pro myself.

This gizmo has three separate attachments — a corkscrew, a small knife and a poky sort of opening doohickey that seems as though it would coax open a beer bottle.

But no. Evidently, brewskis aren’t served at the type of place where this opener works. I fiddled with the “opener” for ten minutes trying to pry off a cap before giving up. The screw and knife were no more help — and threatened to be a LOT more hurt if my grip slipped with them. So I stopped trying before I impaled something important. 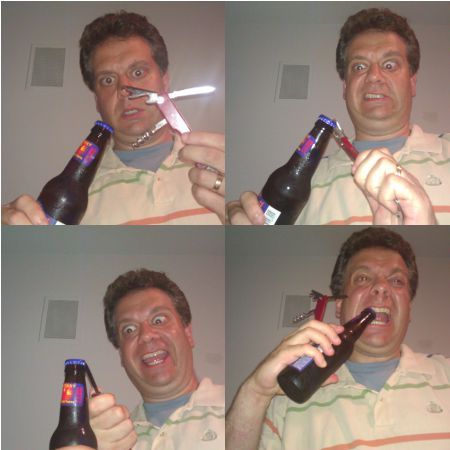 “My kingdom for a twisty-cap!”

In the end, the opener did help me get the beer out of the bottle. But I’m not sure that smashing the neck of the bottle with it really qualifies as cracking open a cold one “in style.” And by that time, it wasn’t even cold any more. The best I can say is that I cracked open a “lukewarm one,” with “extreme prejudice.” At least nobody got impaled this time.

I’ve been told that taste is ninety percent smell. I don’t know from numbers, but I do like delicious beer — and if tastier beer meant smellinger beer, then so be it.

I read up on what real wine and beer tasters do, and there’s an awful lot of sniffing going on before drinking. They say to “open the nose” to bring in the aromas. I don’t know what that means, exactly — to “open the nose.” I’m drinking beer here, not breaking out the Jaws of Life on my schnozz.

I tried taking a big whiff of the beer, but it smelled just like usual. And no matter what I flared or how I puffed, I couldn’t get my nose to open any further. So I bought these hole reinforcements. I figured if I basically taped my honker open with these, I’d have no choice but to smell. 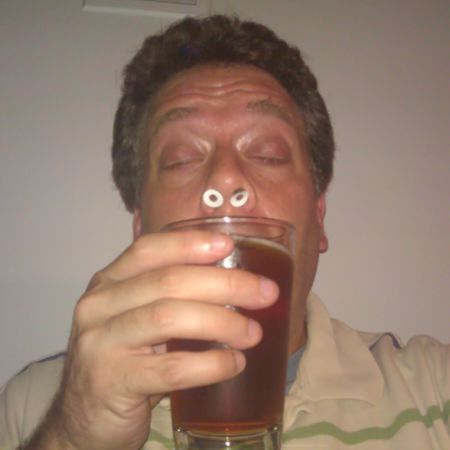 I’m getting notes of horse feet and wood pulp. Am I close?

And I was right. Only now I don’t smell the beer at all. All I can smell is paper and glue, which feel like they’re stuck to an awful lot of nose hairs. When I finally get up the nerve to “deinforce” my sniffer, it’s going to hurt like a mother. I hope I can still taste beer at that point. I’m going to need it.

These are really nice, delicate glasses — each meant to enhance a different and specific type of beer. The set includes vessels for pilsner, wheat and lager beers. I couldn’t wait to unwrap them and try them out.

Only, there’s no IPA glass. Just pilsner, wheat and lager beers. India pale ales aren’t listed as an option. And I didn’t want to misuse my new glasses on the very first day, so I tried to figure out which one was closest to an IPA. At first, I thought the lager — it’s mostly the same color as the beer I had on hand. But lagers are fermented in a completely different way than ales. The glass would probably reject my beer, and spit it right back out on the floor. 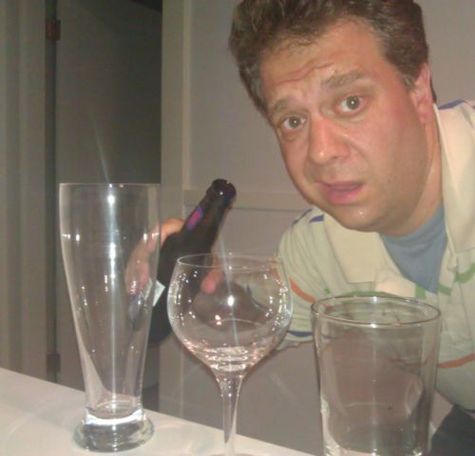 I haven’t been this confused about where to put it since those lounge singers turned out to have Adam’s apples.

Wheat beers don’t work, either. They’re sweet and citrusy, while IPAs are hoppy and bitter. No dice with that glass. That only left the pilsner glasses, but again — hoppy and amber versus pale golden and light? That could never work. I might as well wear my shoes on my hands and underwear on my head. None of these glasses are right for pale ales, and that’s all I have in the house right now. 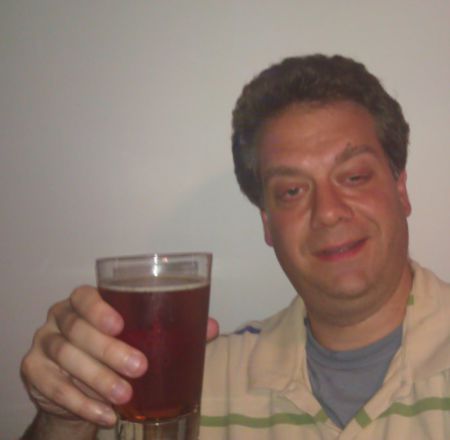 Ah, who am I kidding? That beer never stood a chance. Cheers!