Working life is hectic. If your job is like mine, there’s barely time to catch a breath before yet another traffic jam or staff meeting or disciplinary hearing sucks it right back out of you. Sometimes all you want is a quiet moment alone to reflect. To regroup. To sob quietly into your hands and wonder where your life went so wrong.

Needless to say, I spend a lot of time in the john.

I’m not the only one. Maybe it’s the recession — or maybe it’s the new “Burrito Blowout” special in the cafeteria — but lately the back stall in the mens’ room has been more popular than the water cooler by the hot receptionist’s desk. Every time I need a “time out,” somebody’s already back there. And probably pooping. How’s a guy supposed to get through the workday with that kind of nonsense going on? 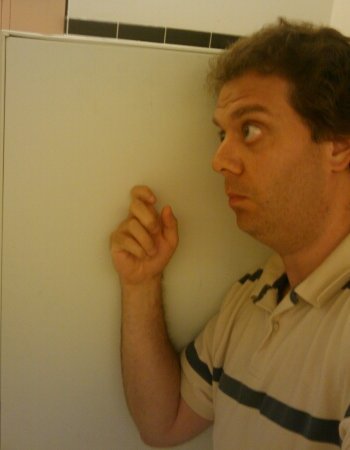 “Hey buddy, got room for one more? I promise I’m just coming in to cry.”

I have no idea. My only hope is to keep all the other office yahoos off my favorite thinking chair. From now on, the only thing in the crapper is going to be me. And the economy. And maybe one of those burritos. But that’s it. Nobody else. And I’ve picked up a few tricky toiletries from Amazon to make sure the others stay away:

I bought this to put over the seat when I wasn’t around. I could always take it off when I needed to, and I figured no guy in his right mind would use an Elmo-ized toilet.

I was either very wrong, or most of the men in my office are directly related to Charlie Manson. If anything, traffic in the stalls was worse than ever. 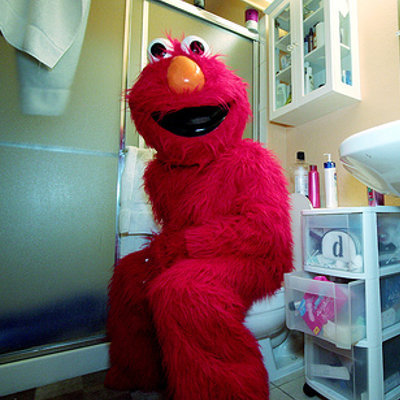 Seriously, would YOU use a toilet with an Elmo on it? I don’t think so.

The seat itself lasted intact for all of three days. By the end of the week, someone had dislodged the Elmo head and jammed it onto the back of the toilet, so the plunger handle stuck through its mouth. Now we basically slap Elmo on the outstretched tongue to flush the toilet.

There’s something you’re not likely to see covered in an episode of Sesame Street. Not even one brought to you by the letter ‘P’.

Few things would make me do a bathroom about-face faster than a piece of poo lounging on the rim of the “pool,” rather than in it. I bought a six-pack of these, to ensure my “fortress of solitude” would remain undisturbed for the long haul. 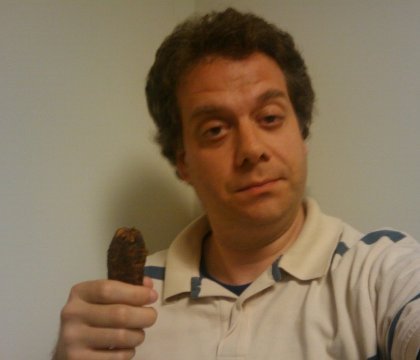 Is that a plastic turd you’re fondling, or are you just happy to see me?

I positioned one on the side of the bowl to shoo away the intraoffice interlopers. It wasn’t outrageously realistic, but that seemed okay — the last thing I’d do if I saw something large and brown on the toilet seat is dive in for a closer look. That’s just not a situation where you ask probing questions like “Poop or Dupe?,” “Scat or Nat?,” or “Cosby, Spills, Ash or Dung?” You see brown on the chair; you run away from there. That’s the rule.

Or so I thought. Evidently, some joker is more eagle-eyed — or desperate — than I am. I tried every morning for a full week dropping plastic poop on the deck, but by mid-afternoon each day the deck was clear — and the stall was “occupado” most of the time. When I finally managed to sneak in for a break, I found the perp had fashioned a sort of hanging “poop mobile” from the missing products. It doesn’t seem to deter any of the people I was trying to keep out — but we’ve had some real trouble keeping a janitor on the floor since then. Poor guys aren’t expecting THAT on their first night on the job.

There’s nothing better for turning away unwanted riff-raff than a padlock. Or a bouncer — but my goal was to keep guys OUT of the bathroom, not bring another one IN. And besides, velvet ropes would just look cheap standing next to a bank of urinals. So I went with the lock.

This model is great, because it uses letters and you open it by spelling a word that you choose yourself. No more fumbling with a tricky dial or forgetting combinations. I latched it onto the toilet stall handle and prepared to enjoy “my own private poopin’ hole.”

Unfortunately, my coworkers are more clever than I thought. The lock didn’t even last the morning before the code was cracked and reset — and now half the time I go in there, someone’s locked themselves INSIDE the stall, enjoying their peace and quiet. Those conniving little devils.

In retrospect, using “DOODY” as the combination word for a toilet stall lock probably wasn’t the best idea I’ve ever had.

After several abject failures at claiming the “throne” as mine, I decided to take a different tack. This five-gallon port-a-potty holds five gallons of … material … and it fits right in the corner of my cubicle. It’s not exactly private — but if I put a towel over my head, then I can’t see anyone around me. It’s like having the joint all to myself. No lines, no waiting, and no one to fight for stall privileges.

And since I’m really just sitting to clear my head, I can use all that liquid capacity for something useful, like a nice seafood gumbo. Or maybe a fresh batch of lemonade. If it can take a little heat, I could probably fill the bowl with fondue, when I’m not sitting on it to contemplate. Heck, those guys can have their bathroom stall — this baby is a comfy chair, a thermos and a lunch pail all in one! What more could an office lackey like me want? 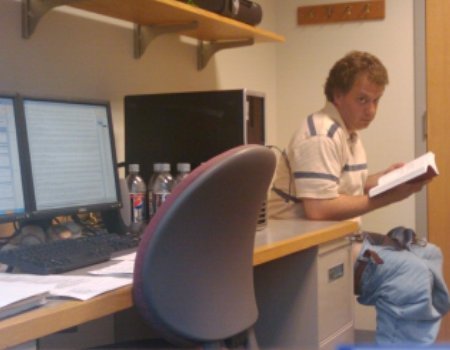 Oh, right. Like none of you people ever dropped trou in the office over a five-gallon pot of tomato bisque before.