← Zolton Does Amazon: Can You Hear Me Now?  |  Zolton’s Facebook Follies: Secrets and Lyes →

Zolton Does Amazon: Beat the Heat

Zolton Does Amazon: Beat the Heat

This has been a most uncomfortable summer. With the mercury millimetering toward triple digits, and humidity levels imported fresh from a Guatemalan rain forest, the weather has been more sauna than summertime. I’ve had enough sweat rolling down my back to charge neighborhood kids three bucks a pop for a Slip ‘N’ Slide. If I built a hydroelectric dam over the crack of my ass, I could power a city block.

Sure, I support global warming just as much as the next guy, but when it has me considering public works projects in my underpants, something’s got to give.

Meanwhile, there’s no end in sight to this sundrenched boxerflooding sweatfest. In the “dog days” of summer, we’re barely through the withers. With six more weeks of dewlaps and flews to go, it’s time for some relief.

So to beat the broil, I turned to Amazon in search of products that could stop a heatwave in its tracks. Or at least at the waistband of my underwear. Here’s how it went:

I’ve watched those Peppermint Pattie commercials for years. Eating one gives “the sensation of shushing down a snow-capped mountain,” they say. It’s like “yodeling in the frigid Alpine snow,” they tell me. It feels like “a giant soothing Sno-Cone down your pants on a hot August afternoon.” So they say, in these commercials.

On a particularly sweltering recent afternoon, I put their advertising to the test. I ate forty-six of these little patties — and I got a “sensation,” all right. Not of skiing or crooning or cooling my undies, though. More like the feeling of three pounds of chocolate crammed down my colon, and a faint minty tinge to all five senses. You ever HEARD peppermint? I can’t recommend it. 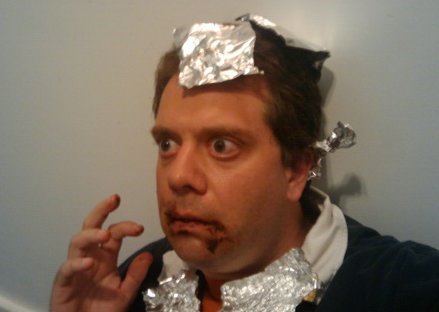 I’ve got the sensation of sledding down a snowy hill — ON MY INTESTINES.

Bottom line: Eat a Pattie if you’re looking for a nice sweet treat. But if you’re suffering through a summertime heat wave? Drop in a Sno-Cone. Your colon — and your BVDs — will thank you.

This seemed perfect. What better way to stay cool in the summer than to live in a house made of ice? And to own an ice house that’s both “cooler” than others and “elite” — what is that, like a nine-bedroom ice mansion with a Zamboni-groomed tennis court and Frosty the Snowman as pool boy? I couldn’t believe my luck that this product was both in stock and under ten dollars. What a bargain!

Sadly, I discovered when the package arrived — the rather less-than-mansion-sized package, I might add — that this is just a small “cooler” for ice or drinks sold by a company named Igloo. And while it might be perfectly adequate for those purposes, it is NOT in any way large enough to serve as a summer live-in ice castle retreat. I can’t stress this point enough. For starters, there’s zero space for servants’ quarters, a tennis court is entirely out of the question, and the closet space is sorely lacking. I doubt I’d even be able to fit a decent garage in the back.

To top it off, the cooler isn’t even made of ice, as I’d hoped. It’s some sort of insulated plastic material or other. And good luck trying to invite the Rockefellers or Mellons to spend the weekend in something like that. It’s simply a disaster.

Finally, I thought, a product designed with me in mind! Of all the areas needing relief from the heat this summer, my laptop is far and away number one on the list. I simply couldn’t wait for my PacificBreeze savior to arrive.

Except when I opened the package, the product manual seemed to suggest that it’s meant for use on some sort of “laptop computer.” But… I don’t have one of those. It’s just really hot in the house, and I wanted to stay cool while I’m sitting on the couch watching my stories on the TV. Evidently, I missed an important detail somewhere along the way.

It’s just as well, I suppose. I tried plugging that USB cable included with the cooler into every “port” I could think of around my laptop, and not one of them made the thing power on. I guess I’m not as “standards compliant” as I used to think I was. 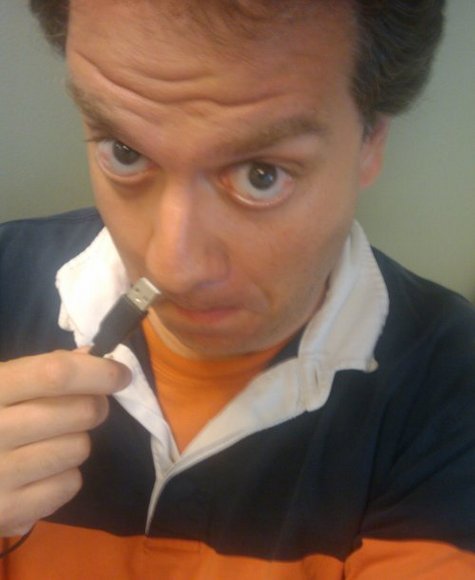 Fat, drunk and with electronics plugged into your face is no way to go through life, apparently.

I found this product in the “Toy” section and gave it a look. I suppose it could qualify as an amusement for kids wanting Christmas in July, or seeking revenge for a St. Valentine’s Day snowball massacre. But I was more interested in refrigeration than recreation, seeking temperature reducement over a ten-year-old’s amusement.

Luckily, the faux snow claimed to be chilly as well as pretty — much like my senior prom date. So I took the plunge and waited with sweaty anticipation for my prize to arrive. Also a lot like prom, come to think of it.

But unlike prom, my package showed up within three weeks — and I wasted no time expressing my appreciation. Throwing caution (and the instructions) to the wind, I poured the whole jar down the back of my shorts, hoping for sweet cooling relief. Which I got, sort of. It’s just that I underestimated the awesome EXPANSION capabilities of this magical white powder. It reacted with the sweat on my body and swelled my pants area up like little Violet Beauregarde on an Icee Pop bender. 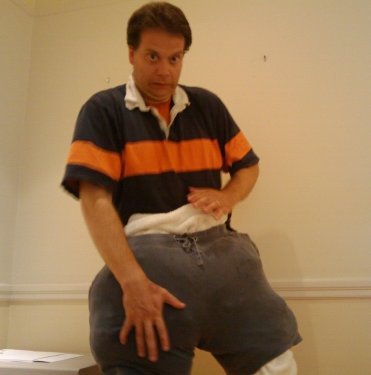 It’s like a party in my pants, and everyone’s curling!

I wouldn’t recommend this particular “application” at home — and certainly not in your favorite pair of chinos — but this snow stuff sure works like magic. I’m planning on ordering another jar (and some sturdier legwear) for the next heat wave that comes along.

Yet another problem solved by Amazon. Sure, I’m out a pair of perfectly innocent shorts, but I accomplished my mission for cool. If I can’t feel my underpants area any longer, then so far as I know I’m not sweating into my underpants area. Zolton 1, Global Warming 0.