If at First You Don’t Pen, Pen, Pen Again

Thing first the first: check out this week’s Secondhand SCIENCE lowdown on Turing tests. It’s all timely and shit. For trues.

Thing first the second — or second the first, or whatever: the Summer of Sketch is heating up! At least, mine is — and yours can, too. If you’d like to see me on stage, saying silly words — some of which I wrote! — come check out one (or all!) of the following shows:

Thursday, June 26, 9pm: Always on Deck in SketchHaus at ImprovBoston

And that’s just the tip of the iceberg. Well, the tip, and then some of the ice under the water, and a lot of the floaty bits that have chipped off. But it’s not the whole iceberg! Stay tuned for updates, more shows, schedule adjustments, venue changes, emergency substitutions and everything else you might expect when bearing down hard on an iceberg. In summer. Ahoy.)

I have exactly two pens in my office at work. Here are those pens: 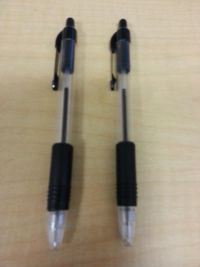 Now, I don’t want to be culturally pen-insensitive here, but those two pens look the same to me. Twin pens. Pen and penner. Two pens in a pen-pod.

I’m sure one of them is a big jazz fan, and the other has some interesting ideas about fiscal responsibility, and if I just got to know them, it would be clear that all pens are unique and special, like inky widdle snowflakes. But I don’t care. I want one thing out of pens — to write.

(For that matter, I don’t much care what sort of different-from-each-other rich inner lives snowflakes have, either. All I want from them is to smoosh together into a neat little ball and smack the neighbor who doesn’t clean up his dog turds in the back of the head.)

(I think I just tore some infinitives a new one, there. Grammatically, that snowflake thing was a mess.

Much like that asshole’s poodleshit on the sidewalk. Youknowwhatimeant, dammit.)

Again, back to pens.

The point is, I can’t tell these two pens apart. Not by looking. What I can tell you is this: one of these pens, I’ve been taking notes and scribbling Post-Its with for the past two years. It’s reliable, smooth-writing, and has never given me one inksquirt of trouble,

The other pen, I grabbed an hour ago on the way to a meeting — because the first one was hidden under a taco wrapper or shoved under a stack of half-baked sketch idea printouts or something.

My desk is an adventure. I won’t apologize for that.

This second pen doesn’t behave quite like the first, despite the striking resemblance. In fact, I spent the first twenty minutes of the meeting I was in furiously scribbling with it on the back of my notebook, trying to get a usable stream of ink to emerge.

I’ve had problem pens before, and I’ve learned a few tricks along the way. I tried all of those tricks. The sweeping circles to engage all parts of the ballpoint — or whatever the hell’s at the tips of those things these days. The savage back-and-forth to build up friction. The wetting of the tip in the mouth — which, naturally, I always try immediately after the friction thing, so as to burn my tongue in the process, because WHY SHOULD ANY PART OF LIFE BE COMFORTABLE ANY MORE?

None of these things worked. Tiny drips of black would slip out here and there, the merest arcs and segments of the circles and lines etching inklessly into the cardboard. After twenty minutes of trying to take notes, I gave up. And immediately forgot whatever it was I was supposed to be taking notes about.

Then I fumed about the pen for the next twenty minutes. So I forgot those notes, too.

The last twenty minutes, I fantasized about torturing the people at Bic who made these pens — one working, and the other some cruel pranking facsimile of the useful one, like a birthday candle that can’t be blown out, or Stephen Baldwin.

So basically, I don’t remember anything at all from this meeting. I hope it was about buying new pens. Because that would be nice.

When I got back to my desk, I searched out the good pen, and made sure it still worked. And I resolved to never lose it — or get it mixed up with its apparently brain-damaged brother — ever again.

And then I put the two side by side, to take that picture above. And now I have no idea which stupid pen is which. And I have another meeting coming up.

Screw it. I’m taking a magic marker in there and writing notes on the wall. Frick these Bics, Jick.