The Heart of the Mutt-er

We’ve had a bit of an interruption in the updates around here this week. For that, you can blame me. Because you probably will, anyway. But it’s not actually my fault. 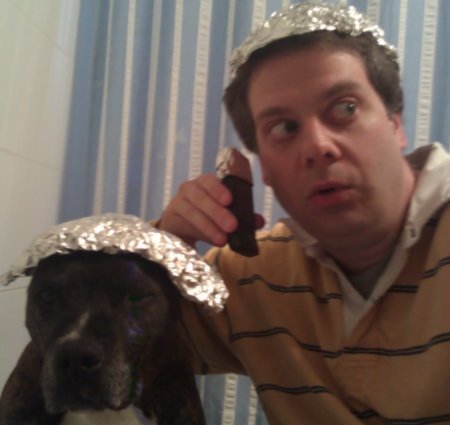 The mutt and I, in happier — albeit weirder — times.

My plucky pooch Susie, for reasons fathomable only to her and perhaps the Eternal Wheel of Doggie Fortune, chose this weekend to fall gravely ill. This is not new for her, sadly. Gravely ill is kind of her ‘thing’.

Okay, so maybe two events don’t establish a pattern. If she’s a ‘gravely ill type’, then by the same logic I’m a skydiver. And I have an unhealthy-healthy obsession with granola. Also, I enjoy using womens’ deodorant, apparently.

Still. Last time she was sick, she had cancer. It took nine months or more to get her checked out, cut open, chemo-ed up and recovered. It’s not like I rubbed on Secret every morning for a year. The mutt makes commitment to a bit, is all I’m saying.

This time, it appears the old gal has a heart condition. A serious one, at that. The dog docs kept her in the hospital for a couple of days, and hooked her up to ECGs and ultrasounds and all manner of other gizmos and testers. We got her back last night, and she’d been Frankenshaved in all sorts of weird spots where the electrodes and such had gone.

Either that, or they were selectively harvesting fur for some sort of tiny hairy suit. Maybe there’s a naked rat running around the joint that thinks he’s Buffalo Bill or something.

(My dog would totally put the lotion on her skin, too. She hates the hose.)

Sadly, the pooch is still very much in the woods, diagnostically speaking. In the best-case scenario, the canine cardiologist — or ‘hound heart hack’, if you prefer — says that they can fit Susie with a pacemaker.

“What wondrous Snausagy times in which we live.”

A pacemaker. For a dog. What wondrous Snausagy times in which we live.

I asked if that also came with a little cane, and doggy dentures, and training her to bark so it sounds like ‘Git offa my lawn!‘

He told me to stop being ridiculous. Those things were all outlandish fantasies. He was a professional, and he’d be happy to cut my dog’s jugular to snake a wire into her heart and bury a battery permanently into her neck to keep her alive, but I was just talking nonsense.

I bet this guy’s loads of fun at parties.

Unfortunately, there are complications — even apart from the science fiction space technology voodoo doggy science that he described. She’s got some other health considerations. Troubling oddities seen in a chest X-ray. Also, she farts a lot.

(I’m not sure that affects the treatment options. But I did ask if, for the love of god, they could do something about it.

They said no. But that was before she peeled the paint off their CCU walls for two days. They might sing a different smelly tune now.)

So we get her back for a week to treat and nurse and pamper for a few days, and then we go back for more tests. And some tough decisions. The heart doc told us when he found these mitigating factors:

‘It’s disappointing. From a cardiac standpoint, she’s a great candidate. I wish it were more straightforward.‘

Yeah, well. That’s not how our Susie works. She’s a persnickety little bitch. And one hell of a fantastic dog.

If you’re interested in other Susie (mis)adventures over the years — most of them are less depressing than this one, I promise — check out most anything from the Dog Drivel category.

And I don’t believe in much of anything that you or I could personally do to change the little mutt’s fortunes on this one, but if you wanted to say a quick ‘Good girl!‘ in the next few days, maybe — just maybe — she’ll hear you.

Just try not to do it near some kids’ playground, or in a strip club. You might come off as creepy. Just a touch.

2 Responses to “The Heart of the Mutt-er”