I’m a pretty easy-going guy. I don’t backhand idiots in public, mostly. I barely have any road rage outside the hours of six AM to midnight. And it’s rare that I’d hold a grudge for more than fifteen or twenty years. Zolton rarely angry. Zolton generally disinclined to smash.

When my home is overrun with pests — insects or critters, crawlers or salesmen — well, that changes the game. Something snaps when I’m protecting my own turf, and I don’t just fight. I kill.

The question is, how best to sweep my sworn enemies out of my house, off this mortal coil, and into a waiting Hefty bag? That’s exactly what I asked of some of my favorite incorporated murderers… er, I mean, companies. Read on for my diabolical inquiries — and my actual Facebook posts on the companies’ official walls.

But fair warning, if you’re some kind of pest apologist — this shit’s about to get real.

When I think of death and messy cleanup of bodies, I think of bleach. So I figured, who better to help me plan a mass murder than a bunch of bleach experts?

Sadly, their rep Claire wasn’t quite as “thug” as I might have hoped: 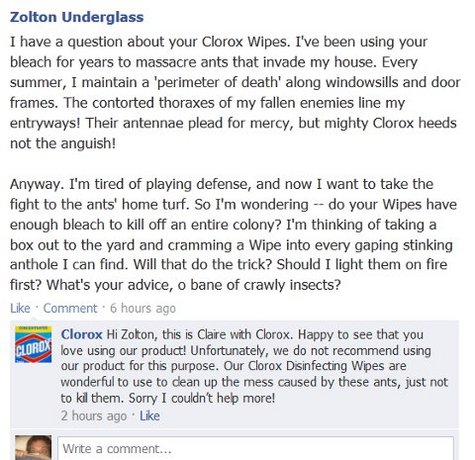 Undeterred, I schemed to send some vermin to the deep freeze. By deep freezing them, which is totally poetic and badass at the same time. It’s like Chuck Norris reading Yeats while he karate chops a samurai in half.

So badass, in fact, that the company wouldn’t even talk about it. Because the gubment won’t let them. HAAAAIII-yah!: 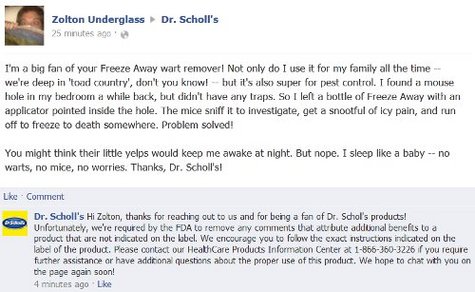 So I took on a new enemy. Something no salt-of-the-earth company could love — a real set of slimeballs. And I didn’t ask for help, advice or federal permission. All I asked for? More ammunition: 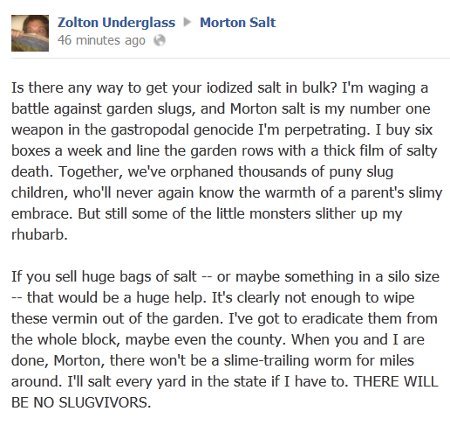 Clearly, it was time to think bigger. Murderier. Furrier.

I figured anything that can kill ninety-nine percent of germs could handle a couple of tree rats. And stay minty fresh in the meantime, to boot: 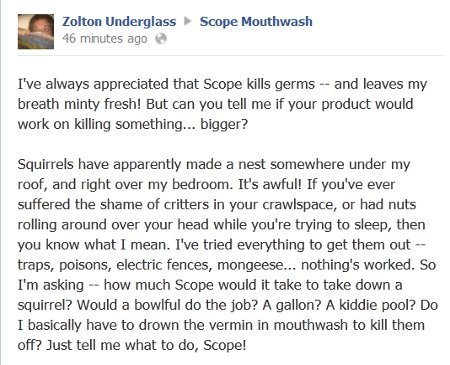 In the end, I didn’t get much help for my murderous plans. Which just goes to prove: if you want something slaughtered, Facebook is probably not the best place to go for advice.

You totally take that shit to Twitter. That’s where the real gangstas hang out, yo. #stonecold #pesticidal #orkin4life