Since I’ve told people around my office that I’m leaving, they all seem to have the same question:

(Never mind that most of them follow this simple question with the words:

“The hell did it take us so long to get rid of you?”

Smartasses. And people wonder why I pee in the eggnog at the office Christmas party.)

At any rate, several people around the workplace have inquired as to why I decided to leave. To most, I’ve listed the tactful sorts of reasons that most people would — I needed a fresh start, it was time to move on, the security guards were too chummy, too many Gantt charts, creeping bureaucracy, employee bios, rogue Belgians, self-evaluations, long lines for the ‘crying stall’ in the bathroom and of course, those $@!%ing meetings. 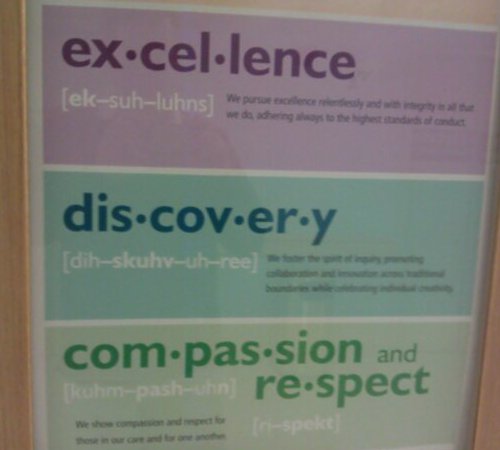 These are all valid reasons. But they’re not the REAL reason I’m leaving. You people, reading right here, I’ll tell the real reason. Somebody needs to hear this. Better you than my HR representative who wears the ass-out-the-door-kicking boots.

Here’s the thing. My current employers have a set of core values. They’re very proud of them. They even post reminders up on the walls with keywords, so we’ll remember these sacred values with the help of just five little words. I managed to snap some of these words in this picture here, including:

And some other stuff; I frankly never make it that far down the list. Also, I accidentally cut the first one off the top. Was it ‘Awesomeness’? ‘Obedience’? ‘Cheeseburgers’? Who the hell knows? Let’s run with what we have.

Now, I’ll say right up front that I don’t disagree with these core values, per se. Excellence is — well, excellent. And discovery — so long as it doesn’t involve some stranger you’ve brought back to your place after a night at a seedy bar — is usually a good thing, too. I’m sure the rest are similarly positive. Who doesn’t like cheeseburgers? I’m just saying.

Rather, my beef comes with the way they’ve presented these values on this sign that’s plastered all over the building. They chose, for some artsy, grade-school-throwback reason that I fail to understand, to present these words both phonetically and syllabically.

(Or whatever the fancy grade-school-throwback word for “separatin’ into sound parts” is.

Some of us may have slept through fifth grade English class. Just a bit.)

“They could slap their core values up on the wall in blinking Comic Sans, for all I care, and I’d probably have no comment.”

This was their choice, mind you. I didn’t tell these people how to write their words. They could slap their core values up on the wall in blinking Comic Sans, for all I care, and I’d probably have no comment. But no. They chose phoneticational and syllabicalicious.

But one of them doesn’t match.

Look at “Discovery”. Just look at it. Broken down, the ‘s’ is in the first syllable. Phonetically, no — it’s in the second sound. The ‘r’ is also in limbo, jostled back and forth between the ‘e’ and the ‘y’. It’s jarring. Confusing. Maddening. I’ve spent hours staring at that damned sign, locked in battle and mouthing ‘discovery’ a hundred different ways to reconcile the two.

It’s embarrassing. And I just can’t do it any more. So I’m leaving. To get away from those godforsaken signs. Now you know.

(And yes, I’m aware that the disconnect may not be ‘wrong‘, exactly. The sign-hoisters seem to have gotten their information from Dictionary.com — and if you can’t trust a fly-by-night, online-only, Johnny-come-lately internet reference source, then who can you trust, right?

So anyway, that’s my real reason for quitting. Just don’t tell the people at work. I want them to think it’s the Gantt charts. Also, if I’m good until my last day, I might get cheeseburgers. It’s one of our core values, probably. So don’t let on. Thanks.