The Mutt of a Thousand Maladies 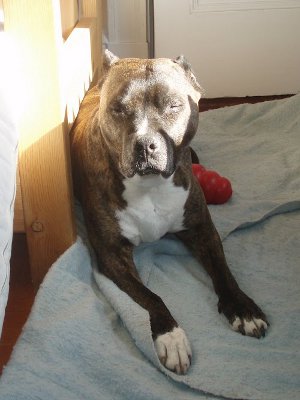 Susie, looking regal between bouts of the plague.

My little dog Susie (pictured at right) is in the hospital.

Sadly enough, this is not especially news. The dog has made a veritable career of being sick and diseased. She’s contracted — and beaten — lymphoma, which involved eight months of chemo and sucking out her spleen.

Possibly through a straw. They didn’t let me watch. Or take it home and bronze it. Meanies.

Then her heart went wonky, and she got a pacemaker.

In between, she’s been on kidney medicine, incontinence pills, fish oil, glucosamine for arthritis, and occasionally antibiotics for various bugs, infections, bacteria, viruses and alien implants that she somehow manages to snurfle into her system.

(For gods’ sakes, she’s a house dog. We feed her from a bag or a can or — in the sickliest of times — a package of lunchmeat. She’s always got water, and we change it fourteen times a day. How in the shit this mutt gets infected with anything stronger than girl cooties from my wife is beyond me.

Personally, I think a lot of this bother is payback for the mousepad. Which wasn’t even my fault! But try explaining that to a dog who’s had her hoohah plastered on a piece of office decor. She won’t listen. Trust me. I tried.

Anyway, the pooch started acting glum a couple of days ago, so we took her to the vet.

Mostly, it involves inputs and outputs. In computer networking terms, her upload speed is vastly decreased. Meanwhile, she’s downloading at an alarming rate, leaking bandwidth indiscriminately and dropping a high number of packets. Often in the middle of the kitchen floor. I’m starting to think she needs a new modem.

The puppy docs, for their part, say the problem could be her liver. I’m not sure whether that’s based on any diagnostics, or whether it’s just process of elimination because that’s the only organ left they haven’t putzed around with yet. Either way, the poor fuzzball is spending a couple of nights in the hound hospital, while they check what’s left of her for further problems.

Meanwhile, it’s really strange not having her around the place. I can’t say I missed tiptoeing around the house this morning when I woke up, so as not to squish into a pile of awful horror before I’d put my contacts in. But it’s weird knowing no accidents were had. I half-wished my wife had maybe peed in the foyer a little, just for old times’ sake.

Don’t tell her I said that. For all kinds of reasons.

Hopefully, we’ll get the pooch back home in a day or two — preferably complication-free, and a master again of her own extremities — but we’ll see what the vets tell us tonight. Meanwhile, I know — based on several previous visits to see her in the coolah — that the pup is currently miserable, and probably plotting her next bowel movement to occur on our doorstep. Or our couch. Or under our pillows, because that’ll teach us to try and fix her up. Again.

Hey, girl. I said I was sorry about the mousepad. You feel better, and we’ll talk about your poop revenge when you get home. One thing at a time, puppers.

Categories: Blasts from My Past, Dog Drivel